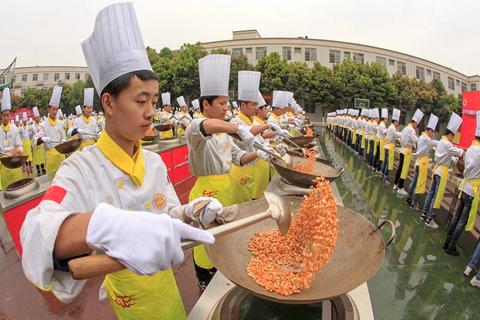 A Chinese culinary training specialist is planning to bring its recipes to the Hong Kong stock market to tap the appetite of global investors.

China East Education Holdings Ltd., China’s largest vocational training provider, said it plans to raise as much as HK$5.3 billion ($675 million) by selling 435.8 million shares in Hong Kong, which would be the world’s largest initial public offering in the education sector. The company would price the shares between HK$9.80 and HK$12.26 apiece, according to China East Education’s filing Wednesday.

The company, based in Hefei, Anhui province, is set to debut on the Hong Kong stock exchange June 12.

China East Education operates 139 vocational schools across China. Its 2018 revenue, mainly from tuition fees, rose 14.6% to 3.3 billion yuan. Profit slid 22% to 515 million yuan. The company attributed the profit drop to rising costs for expansion. Culinary training is the main revenue source of the company, contributing about 60%.

China East Education plans to use nearly half of the proceeds for land and property investment to expand its campuses in cities including Beijing, Shanghai and Guangzhou, according to the prospectus. The rest of the funds will be invested in curriculum research, equipment updates and business operations.

China East Education in November submitted an application to open a school in California in its first attempt to tap the overseas vocational education market, according to the prospectus.