‘One has to wonder if the money funding the VET reform program is actually being applied to real reform of the program itself.’

Employment Minister Michaelia Cash outlined reform plans within the VET program in a $525 million Morrison Government project, while announcing the formation of the Industry VET Stakeholder Committee on September 26.

While the Morrison Government seeks to reform the Vocational Education and Training sector (VET) – a key component of the TAFE education program – the Australian Council of Trade Unions (ACTU) contends those actions are being performed with a bias heavily slanted towards big business and employer groups.

The ACTU points out that among groups represented on the VET committee, the voices of those who ultimately benefit in the way of training and jobs are not being consulted: workers’ groups and union members themselves.

So this is where we are now.
Michaelia Cash dismissing the value of university education & denigrating VET teaching in another stupid slogan 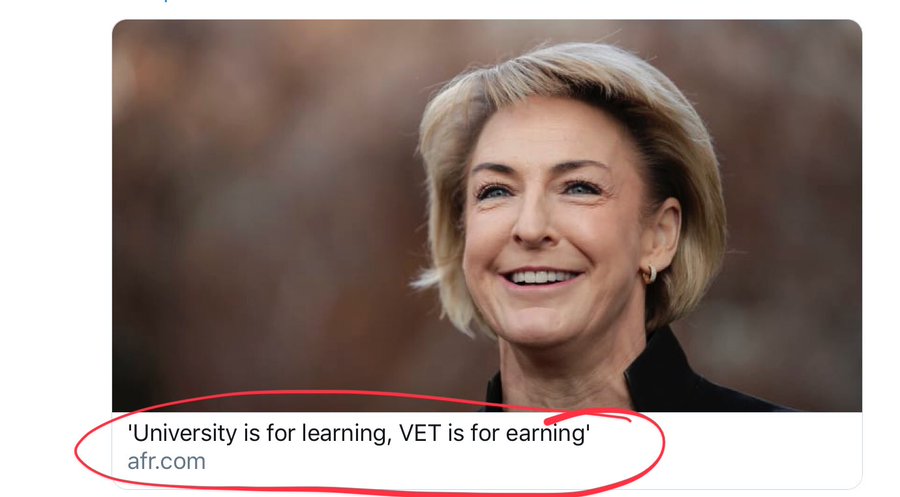 And to officials in the organisation overseeing the union movement in Australia, it’s not just that they feel ignored in the consultation process within the committee and the decision-making process, but that it may have been purposely done as a typical Liberal Party pro-business, anti-worker agenda.

The committee – which will convene once a month effective immediately until mid-2023 – contains officials from organisations among its 19 members such as accountancy firms Price Waterhouse Coopers and KPMG to business lobby bodies Australian Chamber of Commerce and Industry, the Australian Industry Group, and the Business Council of Australia.

And eight of the 19 officials represented are CEO’s of various pro-business organisations, and almost all of the officials on the committee are leaders of their respective organisations.

The ACTU said in a statement:

‘This panel looks to be more of the same from a Government that will do anything to accommodate its big business donors.’

The ACTU and its affiliated union groups also cite the budget cuts and privatisation moves by the Abbott/Turnbull/Morrison Government since 2013 – actions seen as not just debilitating to the TAFE system, but ultimately anti-worker tactics in general – as precursors to the Coalition’s current VET reform agenda.

ACTU president Sally McManus has written to Scott Morrison criticising the decision to leave unions out of a panel to guide training reform.

“Excluding working people from a discussion about skills training is disappointing but not surprising from a Government that caters exclusively to the interests of big business,” said Scott Connolly, the ACTU’s assistant secretary.

The ACTU and its affiliated groups also possess the view that the Coalition’s moves on the TAFE system since 2013 have resulted in shortages of skilled workers across a variety of industries.

Shadow Education Minister Tanya Plibersek agrees with that view and backed it up with statistical evidence in August:

We see about 150,000 fewer apprentices today than when the Liberals first came to government. We’ve seen billions cut from TAFE and training and apprenticeships.  Employers are saying it’s hard to find skilled staff, at the same time as we have unemployment, underemployment and high rates of temporary migration.

The lack of focus on the human element of consultation also appears to exist as just one apparent shortcoming of the planned reforms of the VET program at present.

We’ve got skills shortages right across Australia because of the Liberals’ failure to invest in TAFE and training. This is a brake on our economy. Because when you lock someone out of education, you’re locking them out of a job. #auspol 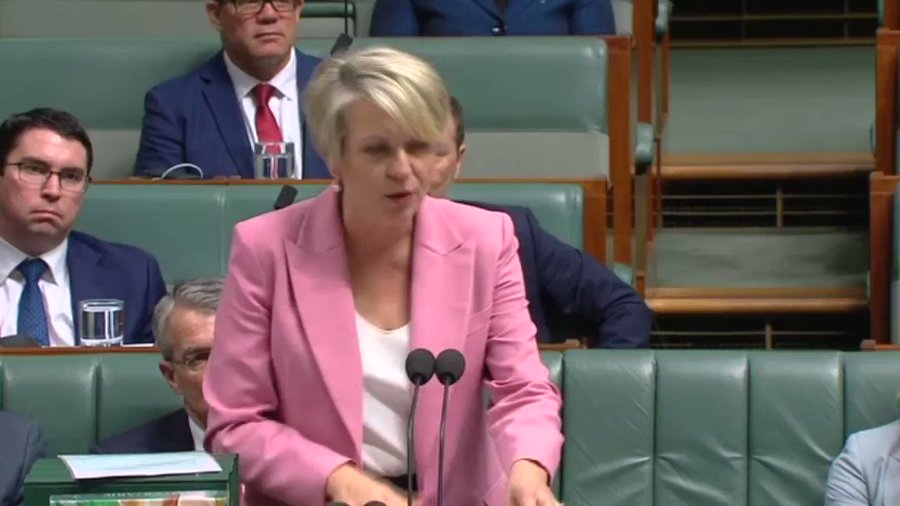 Of the $525 million committed to raising apprenticeship numbers within the VET program, as announced in last April’s Federal Budget, TAFE Directors Australia – incidentally, one of those groups on the VET Stakeholders committee – said that $70 million of that funding is new and the remainder has been taken from unused funds that were previously earmarked for Victoria and Queensland, in previous budgets for similar programs.

And just by paying attention to the sage words of TAFE Directors Australia’s own CEO, Craig Robertson, one has to wonder if the money funding the VET reform program is actually being applied to real reform of the program itself.

Moreover, the VET reform package of proposals has allowed for a five-year plan to raise the numbers of apprenticeships by 80,000 places in occupations facing shortages including bakers, carpenters, bricklayers and plumbers.

But even if those plans are successful, that still fails to accommodate for projected apprenticeships and potential jobs that have been lost since 2013.

Yet Cash has defended the reforms defining the program. “Our vision to create a strong VET sector is critical to our economy and to helping prepare Australians for the workforce of today and the future,” said Cash.

Moreover, for a Government which uses the Australian Bureau of Statistics employment definition of anyone who works as little as an hour per week as being “employed” to inflate its claims of employment growth being greater than what it actually is, it is also counting on other programs to fill the gaps on long-term employment.

‘The Morrison Government is committed to creating more than 1.25 million jobs over the next five years and I’m confident that more and more of the people filling these positions will be coming to employers through the VET system,’ said Cash.

‘We are acutely aware of the workforce requirements in the Australian economy. Our reform agenda will deliver better outcomes for Australians who make the choice to pursue a VET pathway,’ she added.

And yet, Cash has talked around the assertion about workers’ groups, from unions and otherwise, taking part in the reform consultation process:

“Together we will improve the VET system through collaboration of Commonwealth, state and territory governments, industry and training providers, and shift community perceptions around industry-focused training.”

And Connolly remains defiant to Cash’s plans on the reform program, insisting that workers’ groups need to be a part of that process:

We need skills training which puts the needs of working people first and fills genuine skills shortages, not a system that pours money into the pockets of for-profit training providers…

If that fails to occur, then the benefits to TAFE students and those who enrol in the VET program will be negligible, if not debatable altogether.

More Liberal lies. @ScottMorrisonMP says They will skill up Australia with its apprentice program. They have cut $3b from vocational education presided over 150,000 less apprentices and ignored investment in TAFE. I call on Michaelia Cash to debate me on our respective policies.

William Olson was a freelance journalist from 1990-2004 and hospitality professional since late 2004. You can follow William on Twitter @DeadSexyWaiter.

The panel, ironically titled the “Industry VET Stakeholder Committee”, will have no representation for the people participating in the VET system.

Budget cuts to TAFE, privatisation and a refusal by Liberal governments to listen to the needs of working people in the sector has created a serious skills shortage while leaving thousands of young people unemployed.

At the same time huge amounts of public money has been wasted on providers who rip off students and do not deliver the skills training we need.

This panel looks to be more of the same from a Government that will do anything to accommodate its big business donors.

“Excluding working people from a discussion about skills training is disappointing but not surprising from a government that caters exclusively to the interests of big business.

“The Morrison Government is pursing a policy agenda designed to keep wages low, attack the rights of working people and give even more power to big business.

“We need skills training which puts the needs of working people first and fills genuine skills shortages, not a system that pours money into the pockets of for-profit training providers.

“To fix the big problems in VET the Morrison government needs to listen to all stakeholders and act on their concerns. We call on the Morrison Government to include working people in this process.”