Is apprenticeship the canary in the VET cave? – comment by CEO Craig Robertson

This past week saw further news about the continuing slide in apprenticeship and traineeship numbers. It was accompanied by the obligatory wringing of hands followed by the predictable call for governments to do something about it. 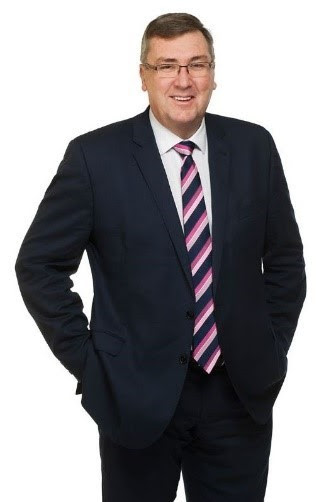 True, governments set the rules of the game. In this case, conducive wages, funding for training, quality assurance over the training and the training organisations, and financial inducements even. And, as the theory goes, the training is specified by industry for industry, but are they buying it?

A quick look at Commencement figures show declines in key areas over the period 2014 to 2018. Trades are not as dramatic, although the halving of Engineering, ICT and science technicians just intuitively is a concern in the face of technology growth. The dramatic drop in food trade workers could indicate the industry is walking away from its own formal training pathways to fill these jobs, because there hasn’t been that dramatic a reduction in Australian’s eating out!

But let’s look at their rate of change compared to these jobs in the economy. A quick glance at the Australian Jobs[1] publication released two weeks ago by the Department that now takes on apprenticeship policy tells a different story. 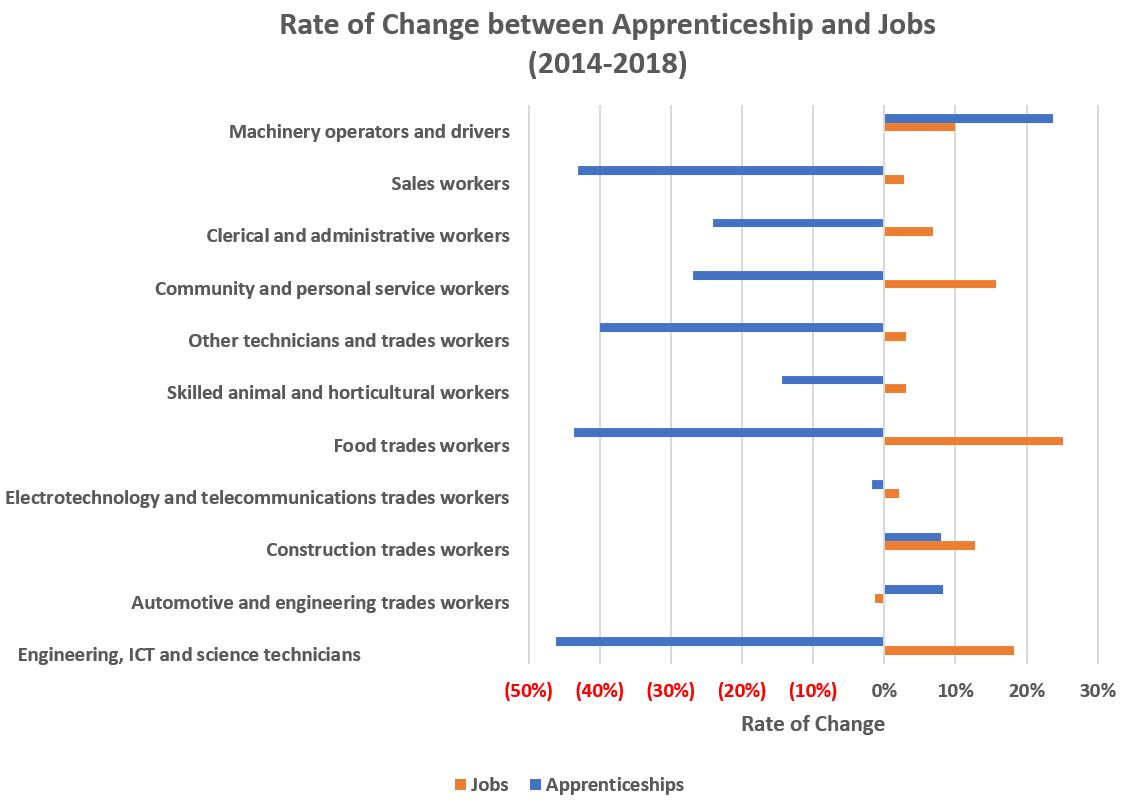 About the only thing we can conclude is that employers are choosing different options. The Government has been keen to tell us of buoyant employment over the period in question. Traineeships for Community and personal service workers is just one alarming example of take-up even when the community understands these jobs are in demand. In this best of times, and with employers not using apprenticeship, even to replenish their skills stock, it’s strange that the Joyce Report is proposing to rely even more on industry. (When I use the term apprenticeship I also mean traineeship, apprenticeship’s cousin from the wrong side of the tracks.)

Shane Wright said in The Age on Saturday: “Household consumption is growing at a level normally associated with a major downturn. Wages are barely moving while retailers cannot entice spending out of heavily indebted consumers who are finding the value of their homes falling.”

In the face of economic headwinds, employers shouldn’t be expected to engage in apprenticeship, but no doubt the Morrison Government will come under pressure to implement counter-cyclical measures to put people into training. That’s the role of Government. To the best of my understanding, it’s to look after the interests of citizens, and public education is one of its core instruments. It’s hard to contemplate in this climate why they would outsource this responsibility to industry under the Joyce logic.

I’m sure industry doesn’t want it either. I guess they want to be productive and simply want to employ capable people to help them be that. Maybe they can’t afford, in either cost or time, to train entry level workers. I’m sure Woolworths doesn’t grow the potatoes it sells or insists they inspect every Corn Flake. Sure, they have standards and insist on them, but they take finished products.

At this point I enter heresy territory as far as VET is concerned. Are employers telling their industry leaders they no longer want the model? Is it better that Government actually takes responsibility for a quality vocational education system that supplies capable graduates, just like we do with universities? Sure, there would still be work-based learning, where it makes sense to hone the craft, and the education experience would be directed to well prepared and well-rounded workers.

Apprenticeships may be too far an ask, but surely something new is needed for traineeships. Either way, with employers not engaging, we need strategies to ensure the new technology of production and services across Australia are transferred across  to firms. That’s why there’s public provision

Heresy it may be. But if the canary is no longer singing, someone had to raise it!

Leading South Australian VET official, Alexandra Reid has been recognised in the Queen’s Birthday Honours, with the award of the Public Service Medal.

She has served in a number of senior positions in the South Australian government and was interim chief executive of TAFE SA from 2017 to 2019.

Canberra-based Louise Mayo was made a Member in the Order of Australia (AM) for  significant service to vocational education and training, and to the community.

TDA extends its congratulations to Alexandra and Louise.

The new federal government has the opportunity to fully examine Australia’s post-secondary education system and build the necessary links between VET and higher education, according to the former head of the National Centre for Vocational Education Research (NCVER).

Dr Craig Fowler has told Campus Review that both VET and the university sector will be impacted by the immediate response to a number of key reviews, including the Joyce Review of VET and the review of the Australian Qualification Framework (AQF).

“Here’s a prediction: The AQF Review will find the AQF is not broken but needs to be modernised,” Dr Fowler said.

“It will adroitly deal with issues such as ‘micro-credentials’ (and similar). But what will be further exposed, if not already blindingly obvious, is a problem upon which the AQF review can’t directly advise.

“The problem is students not having fair and equitable access to it qualifications, VET in particular. This is for the lack of a coherent, federally supported and nationally operating tertiary funding framework that spans the AQF,” he said.

Dr Fowler said the government has opportunity to look at the post-schooling ‘tertiary system’ and give fresh consideration to its ‘architectural policies’ and ‘foundational enablers’, upon which both sectors rely.

“Outcomes would ideally deliver equally strong, distinctive and complementary HE and VET sectors in a better-connected tertiary system, so benefiting both students and employers.”

The federal government has scaled up action to protect international students from being targeted by criminals.

Education Minister Dan Tehan said he has asked the Department of Education to prepare strategies that will protect international students and the reputation of Australia’s international education sector.

It follows police reports of more than a dozen robberies and attempted robberies near Melbourne’s Monash University over a three-week period, recently.

“Earlier this year, I instructed the Education Department to consult with the sector on the further development of strategies to address mental health issues among international students,” Mr Tehan said.

“This national consultation will now be expanded to also look at ways to better ensure the physical safety of students. The federal government is working closely with state and territory governments and education providers to ensure Australia is a safe and welcoming country for international students,” he said.

The Public Education Foundation has launched a new tertiary scholarship for a refugee intending to pursue a career in the creative industries.

The scholarship, valued at over $72,000, covers full tuition for a Bachelor of Arts program, living expenses and internship opportunities at Australia for UNCHR.

Francesca Beddie, a former Australian diplomat and VET researcher, said the scholarship sprang from an idea to remember her mother, a lifelong devotee of the arts.

“It demonstrates what partnerships between like-minded people can do. I would like to thank Australia for UNHCR, the Public Education Foundation and AFTRS for helping to mould a scholarship that will help to show what marvellous talent and resilience refugees bring to our country.”

TDA has been advised that applicants from TAFE will be eligible to apply.

See here for more information and to apply.

The federal government is undertaking a project to enhance the My Skills website which provides consumer and industry information about training options, and it wants to hear from registered training organisations (RTOs) on how they think it could be improved.

As the national directory of VET organisations and courses, My Skills receives over two million visits per year, growing at around 25 per cent a year since it was launched.

Following projects last year to better understand what information consumers want from an enhanced My Skills website, the Department of Employment, Skills, Small and Family Business now wants to hear RTO perspectives, including:

The findings will help create new functionality that aims to attract more people to the site.

The department wants to hear from RTOs – public and private – that are able to participate in research sessions each Wednesday for six weeks, from 12 June to 17 July, with each session lasting about 45 minutes.

The Tasmanian government has announced three new programs that will provide added workforce skills in key areas of the state’s economy.

The Minister for Education and Training Jeremy Rockliff said $200,000 would be invested over three years in the new Agribusiness Career Pathways Cadetship Program.

There will also be funding of $200,000 over two years in a pilot project to raise awareness of career opportunities in the advanced manufacturing sector.

A third initiative will see $150,000 over two years for an early education workforce program.

Help wanted – how to pronounce the new department

One of the pressing tasks following federal elections and ministerial re-arrangements is to decipher the acronyms associated with new and restructured departments.

Apparently, this is causing some consternation at the new Department of Employment, Skills, Small and Family Business.

It seems there’s still uncertainty about the short title, because DESSFB doesn’t exactly roll off the tongue.

At least it’s not lurid or unprintable, as has occurred in some past titles.

TDA Newsletter readers may be able to assist.